Welcome once again to the continuing saga of rebuilding Middle Earth. One nail at a time. Thanks for stopping by.

I was going to start along a dwarfish thread…You know something like ” The ravens are returning to the mountain!” Much like at the beginning of the Hobbit when the dwarves were about to begin their quest to retake the mountain halls of Erebor. Hmm…well it was a thrush and I really just wanted to say that the birds are returning. It’s so good to hear. Many of you, I’m sure, hear songbirds in the morning but there are times at my house that it really feels like a bird sanctuary. This Saturday I heard them in full for the first time. It truly was music to my ears. Spring is in the air!

Dwarves….. They care not for the creatures outside  their mountain homes. They’re inside watching the latest episode of “Prospectors” on their flat screen TV’s. I mean how many times can you watch a close up of lone rock rolling down a hill?But I digress.

Now I’m going out on a bit of a limb with this one.

I get home from work the other night and my wife says, “Guess what I heard at work today?” Of course I’m thinking of something stupid like Malaysian flight 370 landed in the field across the street from our house and they’re looking for people to house the passengers for a day or two. I’m really digressing into the abyss….bear with me though. Then she goes on to say that our neighbors horse was attacked the other night….By a mountain lion!!!! Okay. That woke me up from my drive home. I mean I heard someone say that a few years back. That they released mountain lions to decrease the deer population in New York. (I don’t know the cars seem to be doing a pretty good job of it as far as I can tell. )I have two of those deer kill stickers on my Toyota Corolla.(You know like the stickers the fighter pilots used to put on their planes in World War II.) Anyway it could have been a bobcat or a coyote. It must have been right????!!!!! Right? So after a brief conversation about the truth of this and the possibilities of this my wife says, “Are you nervous?” Gulp. “Of course not. I mean what is there to be nervous about. It’s just a big old cat that’s all. So what if it can leap 20 feet into the air and run 50 mph. So what if they attack from behind usually at dusk or dawn the very times when I’m coming and going. What’s the big deal? Me nervous? I think you’ve seriously underestimated this here husband or yours. Okay dear?”

It figures…that same night I had to go to the Hobbit house in the dark and get a tool I needed to bring to work the next day. Needless to say I brought a trusty hammer with me when I got out of the car and put the rosary beads around my neck. I also put some garlic in my pockets….you know just in case of vampires. Just playin’ it on the safe side. And, yeah, I needed to shower when I got home.

Thanks for listening. A hobbit house you say? Ah yes…That’s what it’s all about. I actually got a serious inquiry about staying at Hobbit Hollow. That was nice. They’re from Alberta Canada. Boy I wish I could finish this thing in a hurry but that is definitely not going to happen. Patience my friends. Minas Tirith wasn’t built in a day and this hobbit house won’t be either.

So. Concrete correction. Hmmm. It was unavoidable but I’m going to have to fess up. I made a mistake. When you make a mistake with concrete that means chopping guns. Two different mistakes, actually and I’ve know about them for quite some time. Just waiting for someone to pick up on what is wrong with the picture if you will. I kind of sort of miscalculated the height/angle of my western retaining walls. By just a couple of inches but enough so that it really should be chopped. Not a big deal. The slab is supposed to sit on top of the wall so if the wall is high you are really disrupting the structural integrity of the slab portion. The eastern retaining walls I totally forgot about angling the wing portion of the wall. We’ll chalk that one up to a momentary lapse of reason. Those sides had other issues that I was thinking about at the time and I just forgot about how the grade was going to change at these locations. Men of Bree arrived at ten….and so we began. Here’s a picture of the southeast corner before we began.

So a couple of things of importance. I had Terence score cut the concrete with a diamond blade on a 4 inch grinder. When you do this, with a “dry blade”, it creates a lot of dust. Concrete dust has silica in it which, if you breath it in, can be dangerous for your health. So we outfitted Terence with a heavy duty respirator and a dust rated filter and then he went at it. (Scoring the concrete helps keep the concrete “neat” while chopping. This way you are able to control the look of the chopping. ) Here he is working on the southeast corner.

Now one of the issues with doing this work was that we didn’t have the proper scaffolding to work on at these locations. So before they got to the site I was working on setting up a safe working environment for them. Once Terence score cut the two eastern sides he helped me set up a special scaffold for the western wingwalls which took a little bit of innovating.

The chopping went way better than I had anticipated. Ethan and Jude blew through the chopping in less than 2 hours. The big blue Bosch chopping guns are awesome. They wail on concrete. Here’s Ethan chopping the southeast corner.

Here’s the finished product. The curvature of the roof is going to come down and sit on top of the wall here.

Oh yeah….another miscalculation. When I ordered the skew back for my detail stuff I had ordered 3/4 inch by 3/4 inch skew back. I never checked it when I received the delivery though. It turns out they actually sent me 1 inch by 1 inch skew back. This is a problem. When I cut my detail blocks I maxed out the spacing for looks, if you will. So all the blocks that we had cut and routed at the 45 degree angle for the spandrel are now too big. They won’t fit the way they are supposed to. Here’s a picture of what I’m talking about. I cut one of the blocks down to show you what it should look like. Check it out.

I could order the smaller skew back but I actually liked the heavier stuff. I think it’s going to look better with the 1 inch skew back. So now we have to recut all the blocks. It’s a painstaking process but this went a lot quicker than I thought as well. Actually Terence came up with a real time saver when we were trying to figure out how to cut everything. It’s hard to explain but his idea cut our time in half. (That’s my boy!) Jude had to do some special homework assignment with friends at lunchtime so I set up Ethan cutting down the blocks and Terence re-routing them after the cut down. Here they are getting it done so to speak. 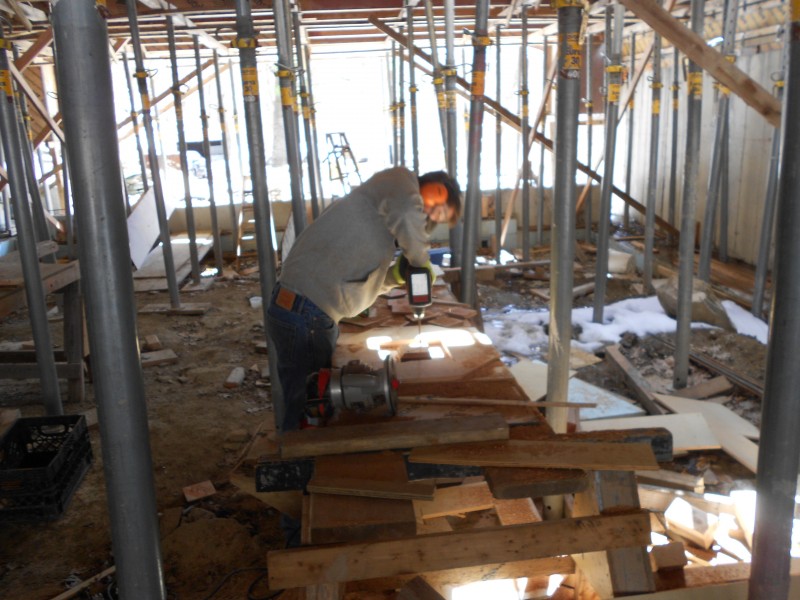 They didn’t finish all of them but they definitely put a heavy dent in the pile of blocks we had. They did an excellent job.

I, for my small part, finished cutting out all of the spandrel sides for next weekend. Soon the picture will begin to change. I can’t wait.

Have a great week! I’ll be enjoying my Irish roots with some Irish soda bread my Italian wife baked and we’ll listen to some Irish tunes by the Clancey Brothers. Enjoy your St. Patrick’s Day.

Oh yeah, and rule number one if you see a mountain lion is never ever run…and that is right out of the “I Survived a Mountain Lion Attack” manual.

4 thoughts on “Concrete Correction and Other Miscellaneous Fun….What Happened to the Neighbor’s Horse!?!?!?”