But there were some who resisted….A last alliance of men and elves fought the Dark Lord Sauron for control of the Northeast Corner….and with much cunning and skill the free folk of Middle Earth prevailed….and enjoyed peace and freedom for many years to come.

Welcome again folks! I hope you all had a wonderful week! Spring is definitely in the air! Or should I say  as Galadriel did”I feel it in the earth…I smell it in the air.” Oh yeah it’s time to rock and roll again on the Hobbit house. I can’t wait. I made a full frontal assault on the northeast corner. Very satisfying. We’ll get into that later. Before I do just a quick word on something I’m doing at work that is kind of interesting.

So we’re doing a residential high rise in Queens again. It’s in a place called Rego Park off the Long Island Expressway. What’s unusual about it is that we are going to build a 20 story tower on top of an existing mall. A fully operational and occupied mall. The crane is also going to sit on top of the existing mall as well….It’s actually located over the intimate apparel section of TJ Max. I’m not joking.

Just the short version. Well kind of short. We had to work on some fireproofing details they wanted us to do because the cranes tower base has to be welded to the structural beams of the existing mall. Anyway the plan was for me to be in TJ Max overseeing the fireproofing with two of our guys and another foreman to be on the roof of the building chopping out where the crane needs to go. Unfortunately for me we have to get locked inside after hours and cannot get out until 5AM when the morning manager unlocks the store.

So anyway we have to move all the rows of intimate apparel by row out of our way so we can work. There was a simple method to the madness. We marked with tape on the floor exactly where everything went and then wheeled each row out of our way in the order it was lined up in to another part of the store. Simple. When we finished at 5:30AM I start to wheel everything back in place to get ready for the store to open. So I wheel the first row back and I’m bringing the first rack of the second row back to put it in place and I see the guy working for the general contractor “Joe” moving the racks that I’ve already set in place. I’m like “What are you doing?” You have to remember that we just worked 10 hours and haven’t slept a wink. I’m not in a particulary good mood if you will. So this guy Joe says “You put them in the wrong place.” Okay…. I know I can look kind of stupid but I’m definitely not as stupid as I look. So I say, in the nicest voice I can muster, “No Joe they’re in the right spot.” I mean you can see the ones that he moved aren’t even lining up with the tape marks I had on the floor! Joe takes out his I-phone or whatever he used to take pictures with and he says “No, I’ve got a picture.” Now he’s got my attention. “Do you mind if I take a look?” At this point I’m thinking the only thing that the manager at TJ Max said was make sure everything gets put back in the right place….and now Joe is going to mess the whole thing up. Anyway I take his camera and look at the picture. He took the picture looking from the south side of the floor but then stood on the north side as he was rearranging the racks!!!! After I pointed this out to him he got it and minded his business as they say in Brooklyn. Geez Joe.

The second night we worked there it went a little smoother at the finish.

So the Dreaded Northeast Corner.

I saved the best for last. I really wasn’t even sure how I was going to tackle this one. It was a completely different animal than the other three corners.

Step one: Clear the area of the snow and ice. I knew there was a layer of ice in there but I didn’t realize the depth of it. There was at least 6 inches of solid ice under the snow. I got the heavy stripping bar out and started chopping away at it. It took over an hour to get all the ice out of the way and have the area prepped the way I needed it to be. I think my heart rate was hovering around 150 beats per minute.Check out this ice.

My arms are still rattled from all that ice chopping.

Then the Crash brothers arrived. Big Crash, Little Crash, and Someday I’m Probably Gonna Crash. Aka: Ethan, Jude, and Terence. Their purpose this day was snow removal. It was in the mid 40’s Saturday and I wanted to get the heavy snow off the layout deck and a portion of the Hobbit house roof. This is basically a setup for the following weekend. Our next move is building and installing the spandrel sides and the retaining wall curb. If the weather holds and stays relatively warm we should be able to get this stuff started next weekend if the snow is out of our way. The brothers worked about 2 and a half hours doing snow removal. This was a total score. It would have taken me forever to shovel all that snow. Here they are clearing off the layout platform.

So one of the problems with this corner is I have a concrete platform that runs into the retaining wall. So what I did was cut down the template 12 inches so it would clear this platform. That was step two. Here it is.

After I had this piece in place I noticed a little problem with one of the stringers, It was kind of higher than it should have been.Enter friendly neighborhood banding wire. There’s like a million uses for this stuff on a jobsite. I was able to loop the banding wire around the stringer and nail the wire in tension pulling the stringer down just enough. Problem solved!

The rest is similar to the others except I couldn’t use stringers where the concrete shelf is. So what I did here is lay down a couple of 2×4 sleepers and cross them with short stringers. Once I got the other side in place I used wedges to snug the stringers to the underside of the plywood templates. Once I had that the way I wanted it I toe nailed all the wedges in place. We’re not going to be able to get underneath this mess once I nail the plywood off. Here’s a picture of the support system with the wedges in place if you’re not getting what I’m talking about. Check it out.

After this it was a simple matter of filling in the support 2x4s and decking it out. Really the hardest part of this corner was the ice and accessing the corner from below.

Oh yeah quick on scribing. Get the piece in position and then use a gauge to scribe the line. Cut and install.check it out. 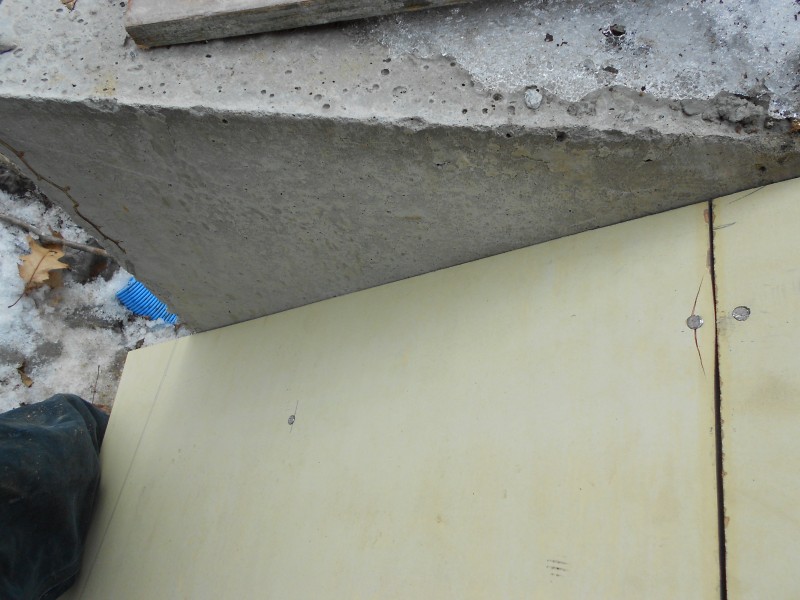 I’m running late so we’ll call it a day. Here’s a picture at the end of the day.

Have a great week and we’ll see you soon!

1 thought on “The Fall of the Dreaded Northeast Corner….What are You Doing?”