Yes people. It has begun. The final pieces of the puzzle are being put into place at long last. A really slow long last but a long last nonetheless. Well……If you speak to the Editor Im sure she would say we have an incredible journey still ahead of us. Hmmmm. She really wouldn’t be that far wrong by saying that either. But the tasks at hand now are more manageable and we’re going to start seeing that long list of task begin to whittle down as the weeks go by.

Welcome by the way and I’m really happy that you’ve all kept the faith so to speak as my father used to say. I know we’ve been at this for a long time but when I walk into the Hobbit House I’m amazed at what we’ve accomplished.

I met with the well guy Saturday and he was impressed. He wants me to get a goat to keep the grass down on the roof. It’s probably not such a bad idea. That is if you’re into having short grass on your Hobbit house roof. I kind of like the wild look I have there now. I  might trim it here and there once I get the walkway in to the patio later this summer. We’ll see. He gave me a rough Idea of what the well connection is going to cost. It was cheaper than the other guy but not by much. Oh well. No pun intended. He says he could install it in a week or two so that would be great. Then I could get a stone guy going on the outside maybe by the end of the summer.  Like I was saying quite a few little things can happen rather quickly in the upcoming months if we plan things right. Very exciting.

Terence graduated from high school this Friday. What a nice ceremony they had. One of his friends was valedictorian. I had tears in my eyes by the time he finished his speech. Terence had a party on Thursday afternoon over at the house the day before the ceremony. Had a great day for it. I was the cook. What a nice bunch of kids. I guess about 30 to 40 of his classmates were on hand.  It makes you hope for the future. It really does. I forget how Gandalf put it when him and the Fellowship were lost in the Mines of Moria.  The gist of it was that its encouraging to know that there are people out there like you who care. Even in dark times. Here’s to Terence, his friends, and to those all over who now call themselves high school graduates! Good luck and may the Force be with you.

You know creating a circular hallway really isn’t that difficult. I mean I haven’t finished it yet and I’m sure there are going to be other issues. But   the actual nuts and bolts of putting it together weren’t really that difficult.  The problem with a circular hallway is that it takes up too much space in the floor plan of the house. And everyone wants more space. So in my situation here I sacrificed  a huge amount of closet space so that I could put this hallway in. I could have  added two eight foot long closets in this area and had a four foot wide hallway instead of the circular one I’m installing. So that’s the downside of circular hallways.

So for all you Lord of the Rings fans out there think back to Bilbo Bagins house. (Bag End it’s called for all you non-Ringers out there.)  Anyhow if you look at the house he has a number of different types of circular hallways in Bag End. The one that I really liked was almost a complete circle. Very cool looking. I mean really cool. To make something like this I probably would have needed an extra two feet in width on my floor plan and I just didn’t have it. Architecturally it would have diminished other portions of the house. So its really hard to find the right balance. I think you’ll see everything clearer when I begin trimming out the front doorway of the house a few weeks from now. The circular stuff is so cool but getting the proportions right takes a lot of planning and a lot of space which is what we didn’t have here on this project.

Yet hope remains……while company is true.

Circular hallways are cool. Because you’ve never walked through one before. Soon we will.

Let me show you what I did. The first thing you need to do is set up your router with a straight bit and a radius arm or trammel. What ever it’s really called I don’t know. Check it out.

To be honest this part was more time consuming than I thought it would be. Putting everything together took a while.

So once you have the radius arm set up on the router its a simple matter to just nail it into the center point of your circle. Once that’s done turn on the router and work your way around the plywood. 1-2-3 done. You can’t cut through the plywood in one pass though. You’ve got to do a minimum of 3 passes I would say. A light quarter per pass by eye. This is a heavy duty Bosch router. 1/2 inch shank if you were wondering. A great tool.

Like I was saying. It takes less than 5 minutes to cut the stuff out. I then had to mark out where the stud lines go on the circle so I could nail the studs on correctly later. I forgot to take a picture of what I did but I used a piece of the cutout to make a stud layout template. It worked like a charm.

I did take a picture of it. What do you know!

I don’t know if you can see how it works though. You kinda had to be there. But it worked pretty well though.

So once I had the studs marked out it was simple to take the 5 pieces and nail them to a frame on the floor. Once that was done I just stood up the frame and nailed it to the corners of the original hallway framing.

I added a 2×6 header on top because I have to build a platform above the hallway to access some mechanicals I’m going to put up there. You’ll see that next week.

The other side went really quick now that I knew how to proceed. I think the second side took me about an hour and a half.

Now we just have to stud out the circle and sheath it with 3/8 plywood.

Have a great week! See you soon.

PS: A couple of extra pictures for the heck of it. 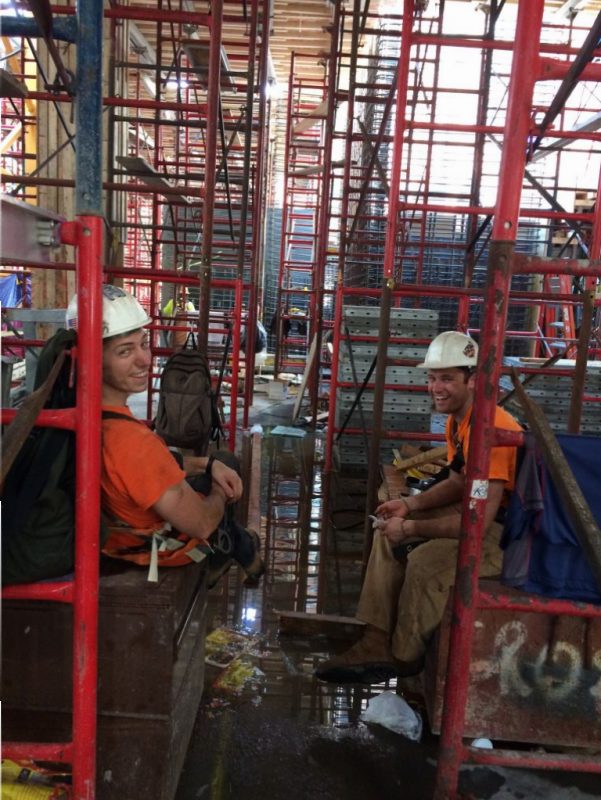 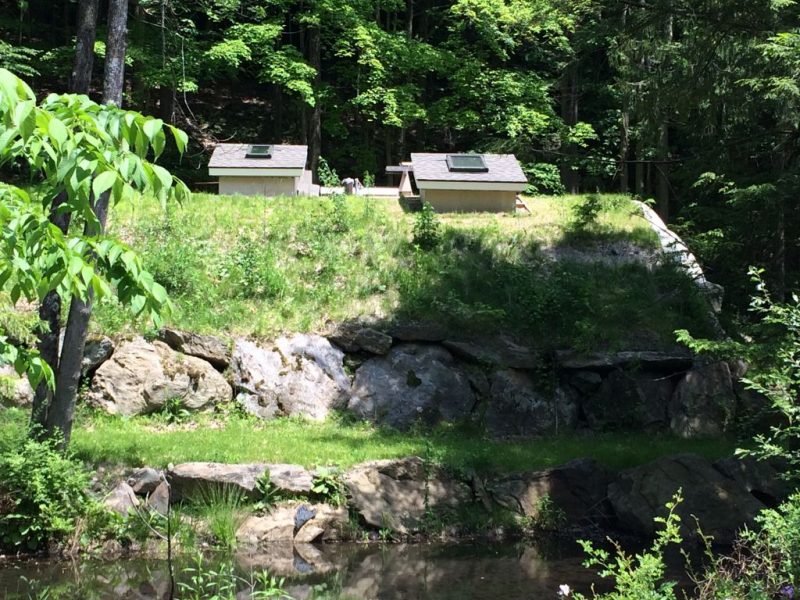