But the power of the Ring could not be undone.

Can the forces that have been set in motion be undone? I wonder.

And I welcome you back to another installment of the Hobbit Hollow Construction Blog. Thanks for stopping by.

Another quote before I get started.

“Much that once was, is lost, for none now live who remember it.”

So an interesting week has gone by for me if you will…and I will get into my short tale in a moment. But let’s set things straight for the record so we don’t lose track of what we’re here for.  Terence had a football game up in Grahamsville, New York Saturday which is about 90 miles from home. That put a wrench in the gears as far as Saturday was concerned. I got a bit done earlier in the day before we headed out for the game at 11:30. I did a little bit more on the backfill prep front which was good.Basically all I did was start dismantling the roof protection I had installed. I figured I would overlap the Mira drain on the roof over the side wall and screw it into the cement board on the sidewall. It seems to have worked. Check it out.

On another note the electric company had a tree cutting service come in and chop down a bunch of trees on my property which is kind of annoying, I’m told they don’t even take the heavy branches away. Look at this mess. 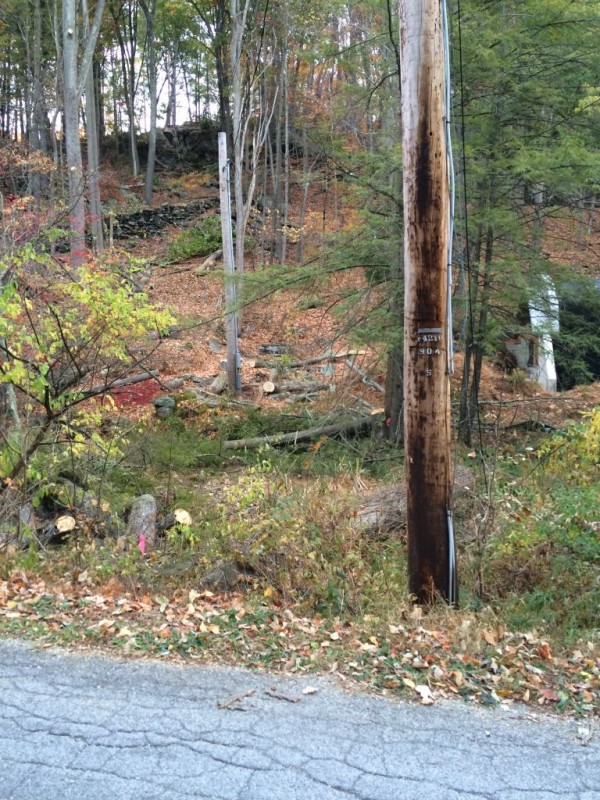 They really did cut quite a few down.

Next week is Terence’s last game which is far away as well. So I probably won’t get a whole lot done next week either. But, hey,you never know.

So 25 years ago I did a small house foundation in Grahamsville, New York for a tinknocker who asked me for help. If someone had told me 25 years ago that I would be back in Grahamsville to watch my fourth child play football I wouldn’t have believed them. I still don’t believe it. At half time I was able to find that home that I (and my wife)worked on. Yes, the Editor made the trek up there with me way back when and gave me a hand with the formwork. Pretty unbelievable. That was during our salad days. It was actually a lot of fun as I recall. Hard work but an out of the ordinary experience all the same.

It’s funny but as we got to the intersection of route 55 and route 42 I all of a sudden knew exactly where I was. (Sort of thinking about Gandalf leading the Fellowship through the Mines of Moria. You know where he at one point is not sure which way to go.) I had that kind of revelation. All of a sudden I remembered everything about the town….and it really hasn’t changed in 25 years, I might add. It’s an interesting ride through parts of upstate New York. The glory days of the past are long gone….and none now live who remember them.

Just a couple of additional items before I sign off for the week.

I’m a fan of the post apocalyptic movie genre. I watched Mad Max, Fury Road Saturday night. It wasn’t bad but definitely not for everyone. It kept my interest. I always like these aftermath movies and the people that are left behind to  inhabit the earth. It always gets me thinking about our current worldwide dilemmas and what’s going on in the world. I think most people like to go with the nuclear annihilation option but I think that is a stretch. I find the climate change scenario of greater interest. Although I’m not sure how that would take place exactly. But I did hear something interesting on the BBC radio program I listen to in the mornings on my way to work.

Permafrost, and the melting of it. So the gist of this interview  was about this permafrost tunnel that the US Army Corp of engineers dug into the ground in Fairbanks Alaska in the 1960’s. So I’m not going to bore anybody here with the minor details because this is supposed to be a construction blog. (Try and keep that in mind will you Jim!)  Just some general info. The permafrost layer is a frozen layer of organic material about 40 feet thick. Climate change, if you want to believe in it, is thawing this organic layer of material. According to this BBC interview,  this thawing will release a tremendous amount of carbon dioxide into the atmosphere. This release will accelerate the climate change equation exponentially! Ultimately leading to more global warming and the melting of the polar ice etc. (Can it be undone?) Okay, I guess that’s enough of that but it was very interesting. Especially for a guy who’s building a Hobbit House. Hmmm. Maybe I’ll have to write my own apocalyptic book. Somebody’s got to do it. Or maybe a How to Guide. You know: Hobbit House Building for the Coming Apocalypse.  Has a nice “ring” to it. Then again the Editor will probably quit if she has to deal with a whole book of my spelling mistakes, poor grammar and bad punctuation. Gonna have to rethink that one. Maybe I better finish off this Hobbit house first.

Sounds like a plan Jim. One thing at a time buddy.

Yes, and thanks for hanging in there friends. Let’s go Mets!

See you next week!

4 thoughts on “There and Back Again…..A Hobbit Builder’s Tale”